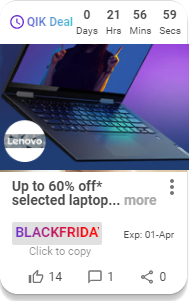 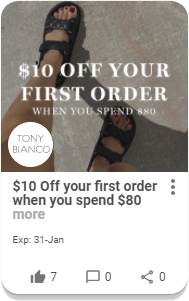 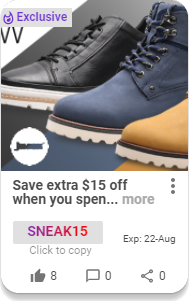 A Social Offers Platform
Our platform*(all Aussie made) allows you to create a social profile for your brand's special offers, product deals and exclusive discounts linking directly to your store, giving discount-seekers an easy way to discover all your offers in one place - from your deals profile page and also our deals-feed. And with just one link, sneakQIK.com/your_brand_name you can take your page and use it anywhere you like wherever your deal audience is to build your followers, helping you hyper-target your best bargains and convert better.
Create Your Offers Page
* Mobile app is coming soon.
We Address Multiple Pain Points for Deal-Seekers and Brands 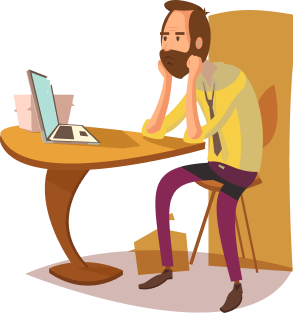 Unreliable deals and sales
The current landscape for deals and promo codes is cluttered with non-working offers especially if you are a big, popular brand. Sad to say, when it comes to coupons shoppers enter in the cart, they are only third time lucky, creating a frustrating experience damaging your brand image and shoppers' trust.

Routine blanket discounts can be costly
By running public discounts frequently on your own website you are basically training your customer base to expect for discounts rather than creating an impulse and urgency. It can be non-incremental(as not all shoppers need a discount), tarnishing your brand image and affecting ROI.

Social media reach for your offers is only a fraction
Organically targeting your offers on generic social media is increasingly becoming hard especially if you are a smaller retailer. And expensive ads limit you from offering great discounts, due to limited margins.

Low email open rates for offers
The email open rates for your legitimate deal emails are declining as audience scepticism increases due to the plethora of generic sales and promotions in the market. They often sit in shoppers’ email boxes unopened.
At SneakQIK, we help you hyper-target your special offers, exclusive coupons and product deals. We believe that brands and shoppers should deserve better value from discounts making it worth the effort. Through our unique business model, any brand, from big to small(all welcome) can create a profile and target their offers to our purpose-built social deals platform or wherever their deal audience is. We believe that by giving control to you and making the offers come straight from the horse's mouth directly to the shoppers, we can not only bring all the best bargains in one place but also create a trustworthy, reliable platform of choice for deal-seekers and coupon-hunters. 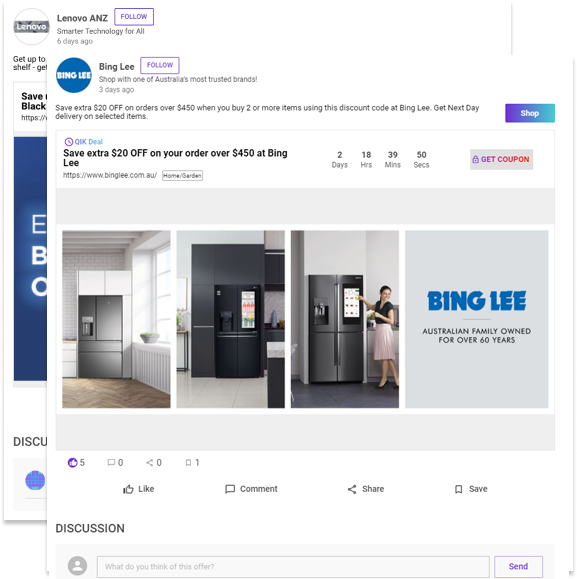 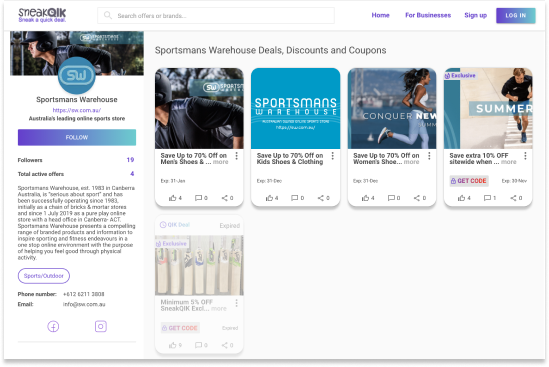 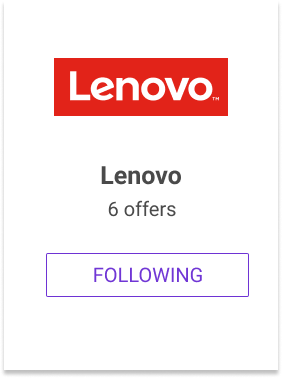 Your Deals and Coupons in Your Followers' News Feed
SneakQIK.com strives to be a trusted deals and coupons site for deal-seekers and coupon-hunters to connect with/follow brands and track their authorized offers. With a simple click of a follow button, your deal-followers can track your ongoing deals and other exclusive discounts you post from time to time on their deals newsfeed. Also, your best offers automatically show on the homepage feed based on our ranking algorithm (weighted by engagements).
Create Your Offers Page
Set Up Your Brand Profile
Get started in a few minutes. You can choose our free plan or sign up to our cost-effective premium plan with a free 1 month trial so we can verify your store and provide you with additional features. This will also help us weed out the spam stores and deals, which is a bigger deal than any other deals we'll have here:) No integration required. SEO friendly links with _utm tags.

Note: If you are part of a performance/partnership/affiliate network please contact us.
1. Choose your plan
2. Create your brand profile
3. Post your best offers
4. Drive traffic and build your deal-followers 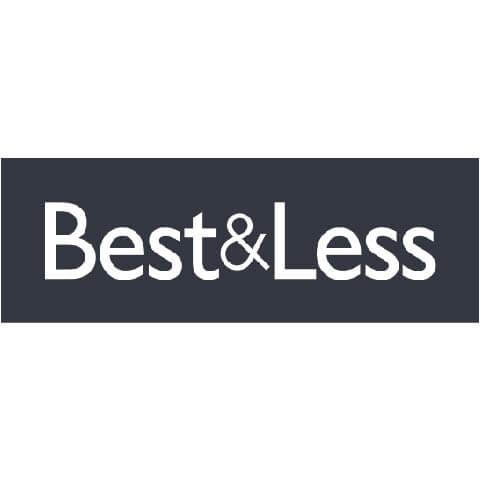 Our websites, deals, and founder have appeared on TV and in various news/media publications such as Channel 7, Money Magazine Australia, News.com.au, Yahoo, Daily Telegraph, CEO Magazine, Power Retail, LifeHacker, Queensland Times, Adelaide Now, Cairns Post, TripleM and many more. We were also a finalist for the best publisher of the year in Rakuten Marketing's 2017 Golden Link Awards.